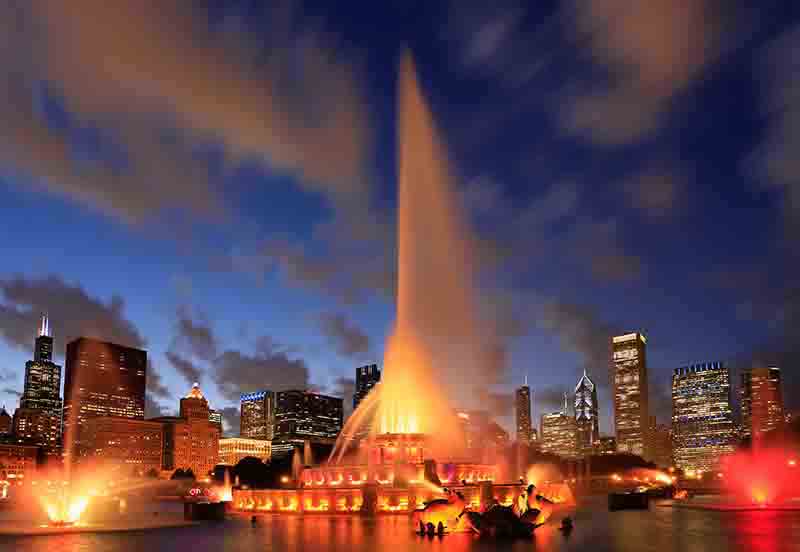 With a center jet continually shooting water 150 feet into the air and fabulous water displays every hour on the hour for 20 minutes, the Clarence Buckingham Memorial Fountain – Buckingham Fountain – is first on our list of Chicago lakefront fun for everyone things to do.

Located in Grant Park, Buckingham Fountain water displays start at 8 a.m., from May through October, depending on the weather. At dusk, spectacular water displays with light and music display happen every hour for 20 minutes, with the final display at 10:35 p.m. 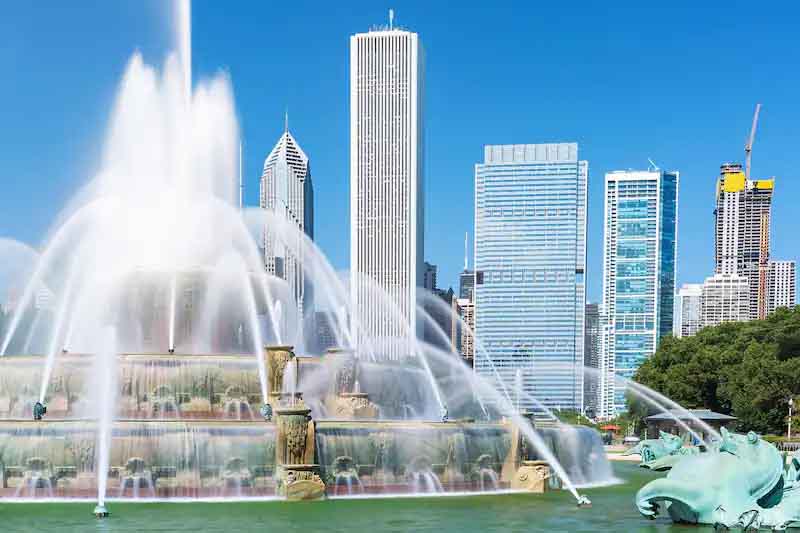 Donated by Kate S. Buckingham in honor of her brother Clarence, the Buckingham Fountain is considered one of the finest ornamental fountains in America. It has been designated as a Chicago Landmark and a contributing feature within Grant Park’s listing on the National Register of Historic Places.

An important Chicago art patron and philanthropist, Kate Sturges Buckingham (1858 – 1937) was the last member of the Buckingham family. Originally from Zanesville, Ohio, the Buckingham family made its fortune in grain elevators, real estate and steel. Kate and her brother Clarence Buckingham (1854 – 1913) were both avid art collectors and benefactors who donated valuable prints, paintings, sculptures, and objects to the Art Institute of Chicago. In the mid 1920s, Kate Buckingham decided to provide funds for a magnificent fountain in Grant Park as a memorial to her brother.

Architect Edward H. Bennett of the firm Bennett, Parsons and Frost, designed the fountain and French artist Marcel Loyau produced the sculptural elements. Architects Jacques Lambert and Clarence W. Farrier served as associates on the project. The fountain is composed of pink Georgia marble, with some granite elements, and bronze sculptures.

During the planning phases, Kate Buckingham expressed that she wanted the fountain’s lighting to emulate “soft moonlight.” According to an early Chicago Park District brochure, “though advanced in years,” Miss Buckingham “worked night after night with technicians, trying out various colors of glass and adjusting the control of electric current” to produce “blends… that pleased her— and indeed, there is a mystical aura around the lighted fountain suggesting moonlight— in fairyland.”