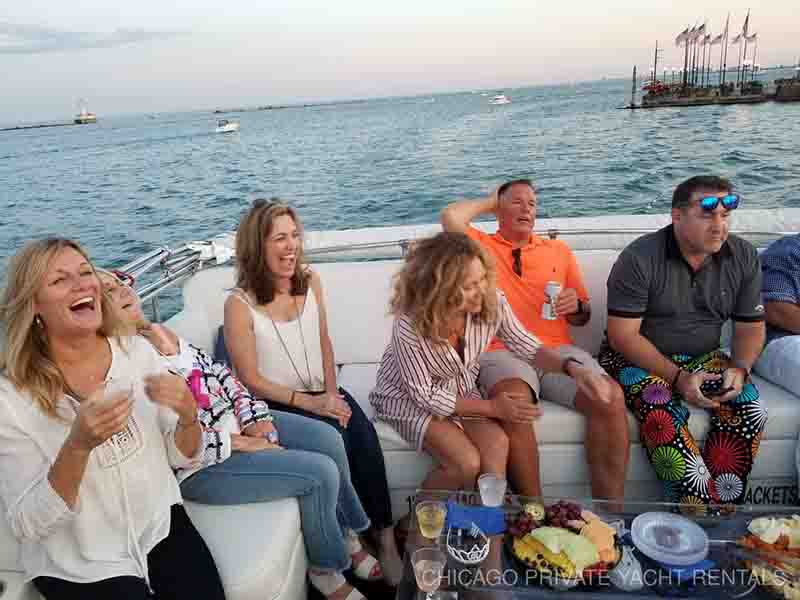 9 Lake Michigan facts to ponder while you enjoy your Chicago lunch cruise.

Lake Michigan is so expansive that many people refer to it as an inland sea. And the shores of Lake Michigan – festive with parks and sand beaches – can easily be mistaken for having ocean views.

The Sea Moose is a private yacht charter. We work with Chicago’s best personal chefs, bakeries, and mixologists to provide custom food and beverage menus. The Sea Moose also has a personal assistant and yacht crew to help your Chicago lunch cruise go enjoyably smooth.

Chicago lunch cruises can be intimate with as few as two people enjoying a romantic afternoon on Lake Michigan. Adeline’s Sea Moose Offers up to 12-person tasting and pairing menus. Or, for larger groups, the Sea Moose can accommodate a buffet style lunch for up to 45 people.

One of the most common questions we get from our private cruise guests is, What can you tell me about Lake Michigan that I don’t already know? It’s true, we have a lot of lakeside aficionados in the Windy City. So, sometimes it’s difficult to come up with facts you don’t already know. But we’ll give it a try with some of our favorite Lake Michigan facts to ponder while you enjoy your Chicago lunch cruise.

Known as “The Third Coast”

Known as “The Third Coast.” We touched on this earlier, but Lake Michigan has so many beaches and so much coast line that it is often referred to as “The Third Coast” after the Atlantic Ocean and the Pacific Ocean. How big is Lake Michigan? Lake Michigan’s average depth is 279 feet, with a maximum depth of 923 feet. It is the sixth largest freshwater lake in the world with 22, 040 square miles of surface area.

Lake Michigan is Bigger than You know

Lake Michigan is bigger than you know. Technically, Lake Michigan and Lake Huron are the same lake. Additionally, Lake Michigan forms a link in a waterway system that reaches east to the Atlantic Ocean through the St. Lawrence Seaway and south through the Chicago River Locks, into the Mississippi River and down to the Gulf of Mexico. Despite Lake Michigan’s massive stretch, figures for the size of the lake stay within its four surrounding states.

The Only Great Lake Entirely in the United States

The Only Great Lake entirely in the United States. Lake Michigan is one of five great lakes. However, most people don’t realize that the four other great lakes: Superior, Erie, Huron, and Ontario share a coast line with Canada. Lake Michigan is land-locked by Wisconsin, Illinois, Indiana, and Michigan.

Most people are aware of the Bermuda Triangle. But Lake Michigan has its own triangle rivaling that of Bermuda. Many believe that a Stone Henge type of rock collection under the waters north of Traverse City has something to do with the strange phenomena in the area. Unexplained ships disappearances and missing aircraft are only two types of curious events that are common in the area.

Lake Michigan has a Lot of Crashes and Sinkings… A lot.

Lake Michigan is Known for Preservation and Fishing

4% of the United States Population Lives Along Lake Michigan

4% of the United States population lives along Lake Michigan. Lake Michigan is large in surface area, depth, and reach. But did you know that 12-million people live along the shores of Lake Michigan? That is the population of Chicago, Los Angeles, Houston, Phoenix, and Philadelphia combined.

Surfing is a Thing on Lake Michigan

Lake Michigan is popular among surfers hailing in the Midwest, and even the outer coasts. Most surfing swells range between four and ten feet. But as storms come in, many adventure seekers look to waves that get as high as twenty feet and sometimes more. While waves in the Atlantic and Pacific Ocean are formed mostly from underwater currents it is a little different in Lake Michigan. When storm fronts move across Lake Michigan the air pressure changes, forcing strong downburst of wind that form the waves.

Contact us to schedule your next Chicago Lunch Cruise. We offer a convenient way to schedule a luxury private yacht on Lake Michigan. Fill out the form online and our event coordinator will be in touch soon!